I wrote my first post on this blog about six years ago. I was three years into software testing then. I’m around nine years into it now. Many things have changed over the years, in processes, in tooling, in people I work with, but some things remain the same. The core of my abilities in making a living as a tester is still rooted in a strong relationship with the software development team, and how strong that relationship is depends on everyone’s communication and technical skills. I’m fortunate enough, all these years, to have worked with wonderful people, enabling me to make a living in an industry I’ve come to love.

I’ll most likely going to be working as a tester for many more years to come.

Today, however, I am putting this blog on an indeterminate hiatus. I’m not sure when I’ll be back. There’s not much to say really, except that I would like to take the time and energy I’ve been putting here somewhere else that may or may not work.

For now, all that’s left to say is a huge thank you for following along. 🙂

Most people will run tests written in Cypress via the built-in test runner. It provides much of the information people need when looking at tests and checking whether it is doing what it is supposed to do – test status, command logs, app preview for each test run, plus snapshots of test steps. Very useful when looking at test failure points.

Some people, however, like to run Cypress tests using the terminal or the command-line interface. Sometimes, we don’t necessarily have to see the test running over the app UI. For one, I can start writing a draft of a new set of tests while the existing test suite runs in the background; I will want to know if there are failing tests, but not get distracted by them running on the test runner. That’s how tests run on a CI server too; we just want the test results.

Cypress works well for both scenarios. There’s just less information displayed on the CLI from running tests by default. To help us debug failing tests without opening the test runner, we could print out information we need from the test as it runs. If we want, we can show network request and response pairs, or simple variable values. Often, I find that printing out the URL at certain point for some tests helps me understand test results better. I can also click that URL to redirect me to the page afterwards if there are details I want to check out later for myself.

In order to print that URL to the terminal, we’ll need to add a task to Cypress as a plugin. To do that, we open the plugins/index.js file and add a log task there, like so:

After that, we can now use the log task inside our tests. Here’s an example:

In a recent automation work I’ve been asked to take part in, running a single test safely, according to peers, generally follow a three-step process:

This means I have to re-run these three steps over and over for every single test I want to review. That can get tiring easily, especially if I have to re-type them repeatedly, or even if I copy-paste. Using the arrow keys in the terminal helps, but sometimes commands can get lost in the history and then it becomes a bit of a hassle to find them.

There should be a way for me to run an automated check I want to review, given just the app name and the test tag. It would be nice if I can run a specific test using a shorter command but still following the same process as provided.

I decided to set aside a little bit of time to write a personal script, and used Makefile because I’ve had experience with that before.

And here’s what the script looks like, which runs the known commands step-by-step plus displays some information on what’s currently happening:

Now I won’t have to worry about remembering what commands to type in as well as the sequence of the commands. I can give more focus on actually reviewing the test itself, which is what’s more important.

“I’ll wait for the code to get pushed to the Staging server before I continue testing because the data there is a lot more stable.”

“It’d be a waste of time trying to teach people how to program when it feels like they don’t have the motivation for it.”

“There’s a high chance things will break after a code merge with the production branch. It’s been that way ever since. We’ll just have to fix those that we can until the release.”

“I wish there was an easy way to spin up a version of our apps in a local environment. That should help us test things faster.”

Some problems become the status quo. It’s worth revisiting them, asking ourselves whether there’s really nothing we can do about it or we’ve just become comfortable with complaining.

I’ve always kept a copy of Richard Bach’s “Jonathan Livingston Seagull” within reach, for those days when it seems necessary to remind myself of Jonathan’s story – of struggle, of questions and learning, of constantly challenging himself, and of keeping true to his curiosities. I’ve re-read it a number of times in the past several years (it’s a short book, digestible in a few hours), and it has never failed to uplift my spirits. It always feels like talking to a great friend that I’ve never seen for an extended period of time.

Here are some favorite lines from the book:

Circle CI has been around a while but I’ve never tried their service before. There hasn’t been much of a reason to do so; at work I mostly stuck with a local Jenkins instance because it got the job done. But I recently had the urge to try it out for a private project that I have. I wanted to see if it plays well with Cypress, a test tool I’ve been using for some time.

A search tells me that there’s already a Cypress-Docker-CircleCI example on Github, from Cypress themselves. Cool, I just need to copy their settings to my own project and make changes accordingly.

You’ll see a cy:circle-junit command in there, which does the same thing as cy:run (which runs tests on a terminal) but also builds a JUnit report.

To run our tests on Circle CI, we’re going to need a circle.yml file inside our project, which contains the following: 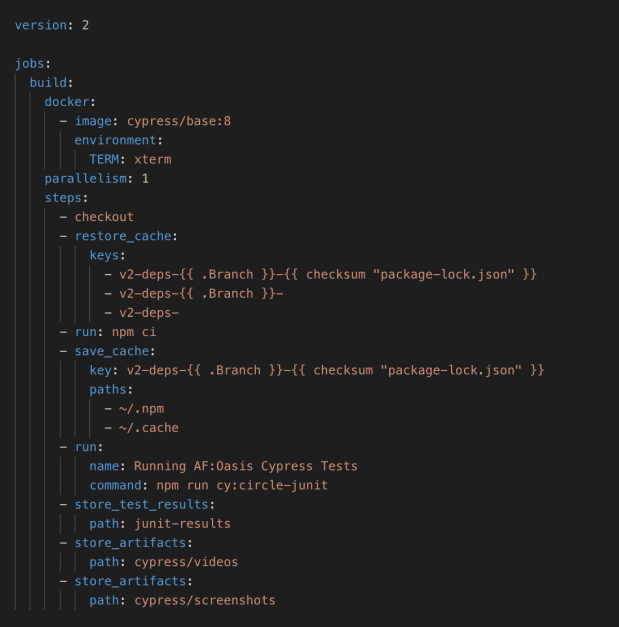 From this file Circle CI is supposed to checkout the test code, run the cy:circle-junit command, which installs Cypress and other dependencies inside a Docker image, saves that image in a cache (and restores that cache for every succeeding test runs as long as the dependencies remain the same), runs our tests inside a container, creates a simple report, and stores test artifacts afterwards. Looks straightforward. 🙂

Connecting my Cypress project on Circle CI and pushing code changes on the remote repository automatically creates test runs that shows up on a neat dashboard like so:

And we can zoom in on the details of every test run, which looks like this:

Awesome! Looks like I’ll continue using their service for this project, and maybe on other projects as well. I’m off to adding proper tests to the suite!

It’s easy to get caught up on writing a lot of automation, adding more process steps, and implementing stricter policies, believing we need them, because we think we’ll be safe from risks that way. We might have had a history of being carelessly bitten in the past.

So it is good that we’ve chosen to do something. But we have to be aware of the potential to get lost in the details.

Why did we have to do this work in the first place?

I’ve made a rookie blog post mistake early in the new year:

That is, I forgot to remove a scheduled blog post I’ve made in the past and it got published recently. Some of you might have gotten the post through email and wondered why I’m talking about 2017 and maps. It’s a little embarrassing; that post should have been in the trash a long time ago but for some odd reason I didn’t delete it until now.

Maybe I thought there was an idea worth saving in there which I forgot to review. Or perhaps I just got lazy.

I’ll just think of this as a reminder that mistakes are always bound to happen. And what’s important is how we behave and what we do when they happen.

The post is gone now. And I am sorry about the weird blog post. I’ll make adjustments on my end so that it won’t happen again.

The new year is always a great time to remember to talk to our guardian angel, to look at what beliefs do we have come to accept, and to remind ourselves of which sort of heaven do we really want to go to. 🙂 Happy New Year!

Some favorite lines from the book:

All year round, I’ve spent some considerable time thinking about where I am and where I want go next. Where I am is where there’s some sort of stability, a status quo. Where I want to go next is some place where there are unknowns.

It would be interesting to experience a full-time remote gig, in a role that challenges my skills in either building automated scripts or mobile app development. But even though a full-time gig, it should still enable me to work on personal side hustles.

After increasing my overall strength to at least twice since the start of the year, I’d like to surpass that achievement in the coming year. That likely means making better food choices and improving cooking skills.

I want to build my portfolio site from the ground up and get more acquainted with web development.

And it would be great if I can finish the art project I started this year, to complement the portfolio site.

I believe I did well with my testing goals this year. My lifestyle got better, but I’m not where I want to be just yet.